Stop What You're Doing and Read This!


Hundreds of years ago, Socrates feared that changing from an oral society into a literate society would shallow the human brain’s ability to explore. He believed that printing  wisdom and asking students to read it would encourage them to simply decode the print without ever realizing the wisdom personally. They wouldn’t have to work out for themselves why a piece of wisdom was true; they would simply read it, take it as fact, and move on. The vital exercise required to process data and come to a conclusion would become archaic in the face of books, and society would weaken intellectually. Now, with the development of e-readers, the Internet, Google, etc, scientists and readers are beginning to wonder if society will decline still further. Now students needn’t even search for a word to understand its meaning; they can simply Google the definition. They needn’t analyze a piece of literature; they can Google an analysis. Stop What You’re Doing and Read This! is a compilation of ten essays by reading advocates who argue that literature must continue to be a backbone in our society, and that it can survive to enrich thinking in the 21st century. 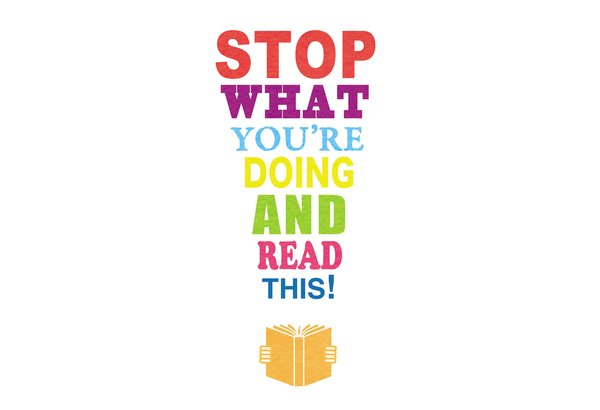 Stop What You’re Doing and Read This! opens with a foreword that offers a few disheartening facts about the literary life in Britain today (a Britain that once housed Mr. Charles Dickens, and Ms. Jane Austen) These days in Britain (according to the book), one in three teenagers read two or fewer books a year; only one in six children reads books outside of class; many homes do not contain books; and reading to children at bedtime, according to this book, is becoming a novelty rather than a habit. Video games and the Internet are making mush of the minds of people whose great-great-grandparents rushed for the latest paper of a morning, not to get the latest score on a favorite team, but because they were mad to know what would happen next for Dickens’s unhappy orphan in Oliver Twist. Add is addressed with a handful of pills rather than the direction to "sit down and read a book", because who can focus on books these days? Why would anyone read this book? There is TV and web-surfing to be had, and that’s entertainment enough for our generation.
Email ThisBlogThis!Share to TwitterShare to FacebookShare to Pinterest
Newer Post Older Post Home